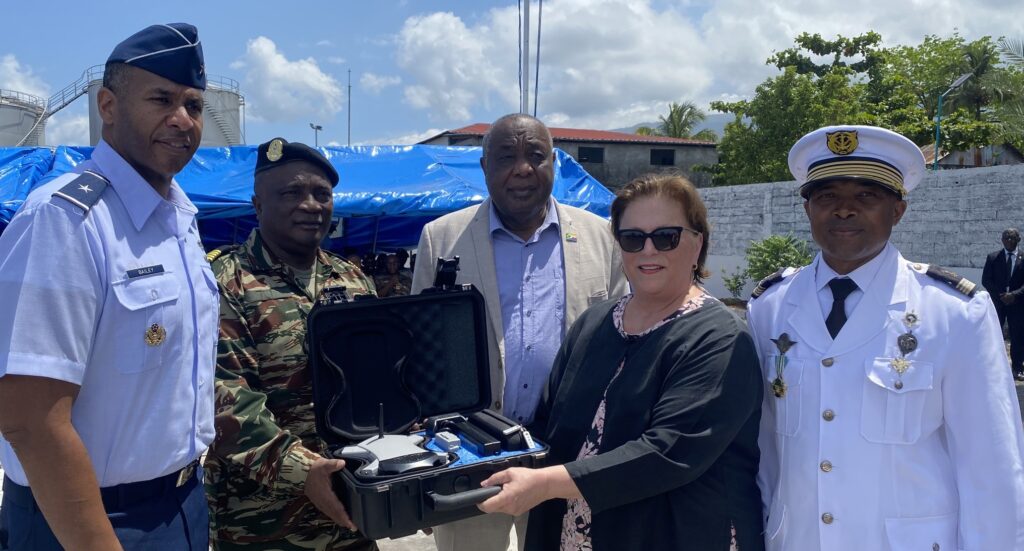 Leaders from the United States met with Minister of Foreign Affairs Dhoihir Dhoulkamal and Defense Delegate Youssouf Mohamed Ali, among other government officials.

Ambassador Pierangelo and General Bailey participated in a ceremony to hand over three maritime surveillance drones to the Comoros Coast Guard.  The drones, donated by U.S. non-governmental organization Spirit of America, will improve Comoros’ maritime security; save lives during search and rescue missions; prevent illegal fishing; and reduce the trafficking of persons and narcotics.  Spirit of America relies on donations made by U.S. private citizens to fund its activities, including the purchase of these drones for Comoros.

At the handover ceremony, Brigadier General Bailey, USAFRICOM’s deputy director for Strategy, Engagement, and Programs and the first USAFRICOM general to visit Comoros, announced a 50 percent increase in funding to support participation in U.S. International Military Education and Training for members of the Comoros military and Coast Guard.

To promote economic growth, Ambassador Pierangelo met with representatives from U.S. companies to discuss trade and investment in Comoros.  She noted: “The U.S. government is pleased to see growing engagement between the Union of the Comoros and U.S. businesses. Around the world, U.S. companies bring with them quality investment, high business standards, and advanced technology.  U.S. companies are also well known for investing in local communities, creating jobs in the local economy, and protecting the environment.”