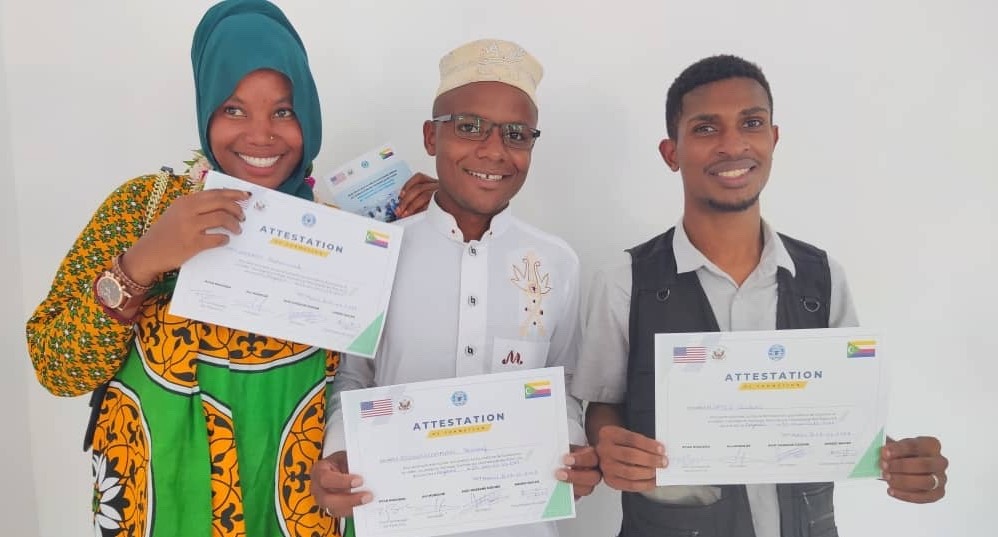 ANJOUAN – Forty Comorian journalists recently strengthened their investigative skills and journalistic accuracy with the Solutions Journalism (SoJo) approach, supported by the American people.   On November 9, U.S. Ambassador Claire Pierangelo awarded certificates to 12 Anjouan journalists who recently completed their training, while 20 journalists from Ngazidja and 8 from Moheli received their certificates from other diplomats from the U.S. Embassy.

Solutions Journalism is a journalistic approach that treats the news in a way that makes the information more balanced by providing and sharing solutions, without denying the issues or challenges.  Because many Comorian journalists have learned journalism through on-the-job training, lack basic professional training, and in light of technical and ethical weaknesses related to this, Ahmed Bakar, a Comorian journalist, initiated the project entitled “Establishment of a media platform and training of journalists to promote Solutions Journalism.”  He wanted to capitalize on his participation in the State Department’s International Visitor Leadership Program (IVLP), where he became familiar with the concept and wanted to share it with his Comorian colleagues.

To support a free, professional, responsible and participatory press in Comoros, the U.S. Embassy funded the project for one year with $31,738.  Solutions Journalism is a concept that emerged in the United States in the late 1990s and expanded to different parts of the world in the 2010s to better encourage citizen engagement by reporting on solutions to social problems.

Since its launch in October 2021, the project has earned the support of media directors and managers who are aware of the importance of the Solutions Journalism approach to create a more professional and responsible press, and who have since opened their columns and airwaves to the work conducted by the project.